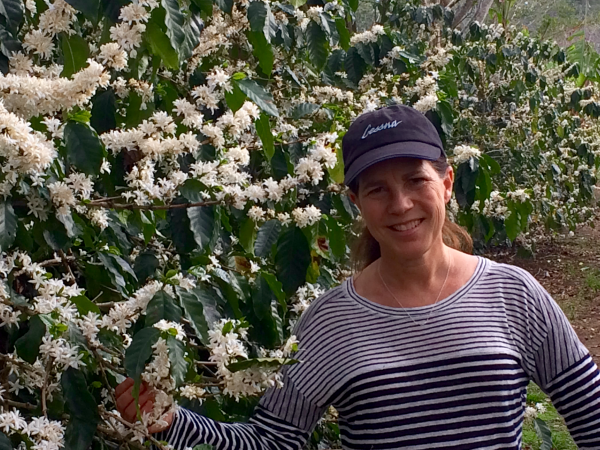 Chris is a thru-hiker who has completed eight long-distance trails including the three trails that make up the Triple Crown. He purchased Triple Crown Coffee in 2020 as a way to combine his two loves, coffee and thru-hiking.  When he is not slinging coffee Chris works as a Massage Therapist and is a competitive axe thrower.

Originally from Michigan, Lisa moved to Portland, Oregon, where she learned to appreciate coffee and the “farm to cup process.” Living in the Pacific NW became a foundation for perfecting the craft of sourcing and roasting great coffee and starting her company, “Triple Crown Coffee.” Lisa hiked the Pacific Crest Trail in 2012 and the Continental Divide Trail in 2014, 2 of the 3 long-distance hiking trails which make up the “triple crown of hiking trails.” (The other one is the Appalachian Trail.) As a way to give back to her trail experiences, a portion of sales are donated to the trail organizations that protect each trail they represent. Lisa is a full-time airline pilot, a member of the Oregon Coffee Board, and enjoys hiking, dancing, and rock climbing.

Where do you roast your beans?

We partner with the good people over at Dean’s Beans in Orange MA. They supply and roast to our specifications. We chose Dean’s Beans as our roasting partner because of the fantastic product they produce and because of there commitment to using coffee as a vehicle for positive change.

Where do you get your coffee beans?

Do you have a shop?

Not at this time, but maybe in the future!

Can I serve Triple Crown Coffee at my event?

Yes!  Please send your name and event info to Chris at info@triplecrowncoffee.com

What types of coffee are available?

Light, medium, and dark roasts are available in 16 oz bags of whole bean.

Where is Triple Crown Coffee based?

Can I order coffee for my business?

Yes!  Please go to the Contact page and send us an inquiry.

When I order coffee, how will I receive it?

Your coffee will be delivered by USPS for a flat rate of $8 for orders up to four pounds. Shipping costs will increase by $8 for every four pounds added.

What size is each bag of coffee?

Our whole bean coffee is available in one-pound or two-pound bags.